At the time of writing - End August 2014 - the Entrance is open and flowing well. Getting TO the channel to get out with a boat can be a bit of a hassle, with several shallow areas where you might need to get out and walk your boat through, but the channel itself is flowing well and with good timing of the tides you can comfortably get a few hours fishing in. The main thing is the lake is getting good water exchange and tidal flow.

It's been a while since I commented on the state of the entrance so here's a brief update. As of this month, the entrance is pretty narrow, but it's deeper than average and flowing strongly, so there's still good tidal exchange. What the next lot of big seas or major storm periods will do to the status quo is anybody's guess.

OPENING OF THE LAKE ENTRANCE - DECEMBER 2004

Wonboyn Lake's entrance to the ocean had been narrowing and filling with sand for several years, so it was only a matter of time before it closed completely -- it finally did, overnight, following a severe storm out at sea in mid-September 2004.

Over the ensuing weeks the sand built up steadily, eventually reaching the point where only an unlikely natural event of monumental proportions would have been able to shift it.  Our local council and the involved government departments responded promptly with permissions and funding for the entrance to be opened mechanically, and, after several weeks of anxious waiting while a few hurdles were overcome, Bega Valley Shire Council had an excavator digging out a channel by Monday, 6th December.

In the end everything came together beautifully, as though orchestrated.  Three days of rain locally and in the catchment upriver coincided perfectly with the excavation.  The water in the lake rose steadily every day, building up in the newly-dug channel then breaking through the last few feet of sand left by the excavator at 7:45 a.m. on Thursday, 9th December.  The time planned for opening the channel mechanically had been 8 a.m. (an hour after high tide) so the timing was absolutely perfect!

Since the entrance has been reopened we believe - without any scientific evidence, of course - that there has been a significant increase in fish numbers, not only in the lake but off the beaches.

We would like to thank Bega Valley Shire Council for their huge contribution to ensuring that our lake's wonderful, thriving ecosystem remains unspoilt and healthy.  Hopefully they will continue to see the value of this project and support future efforts to maintain the lake's health.

After five good years, the entrance had been getting smaller and shallower for some months, then closed again altogether in early December 2009. Happily, the Bega Valley Shire Council has been supportive of lobbying by our oyster farmers and other interested parties (including us) and the entrance will be reopened when tides and other conditions are right. We can only hope that we will get some excellent rain to facilitate an optimal result such as we had five years ago.

It's raining steadily but lightly right now (4/2/10) -- the first rain we've seen in a long time. After the very extended dry period we've had we need many more good falls to fill the lake to its peak and desalinate the water. At present the system is holding up reasonably well, considering some very hot weather recently, and there only one or two isolated stagnant and murky areas up near the entrance. Obviously the sooner a good tidal flow is restored the better.

Apparently the possibility of putting break walls in to protect South Coast estuary entrances has been discussed at relevant meetings, with majority support, but when or whether this might eventuate is anybody's guess at this stage. A break wall at Wonboyn would assure the good health of the lake indefinitely, so we are hopeful this comes to pass.

Great news! The torrential rain we've had over the past several days - over 300mm in less than a week - had been steadily filling the lake, and by this morning the car park and the road crossing at Myrtle Cove had flooded, as they did in 2004. When Bucky popped down to see how the entrance looked, it must have just blown, of its own accord - probably at about 9am. By the time he got back the level of the lake had already dropped significantly. It's somewhat of a pity this happened at high tide, but Bucky reports that the flow into the ocean was excellent even so, and at this stage things look much as they did after the last mechanical opening. I will give a further report and hopefully add some photos after the water has cleared and we've seen what the final flush at low tide has done.

Things are still looking good at the entrance, with boats going in and out freely. Apparently the channel is deeper than ever, and all reports are positive after we initially heard that the opening wasn't "that great". Bucky was going out yesterday to see for himself, but his motor played up so he didn't get out. Unfortunately I still don't have any photos of the mouth itself yet (I don't get out much, you know!!) but meanwhile here are some taken on the morning the lake flooded and opened. 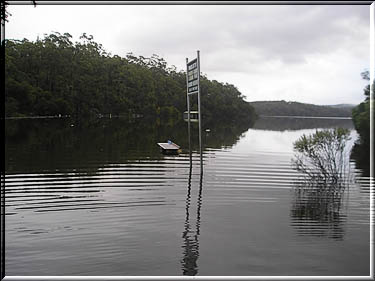 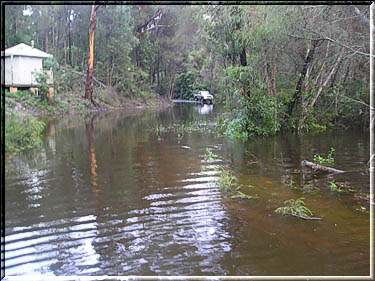 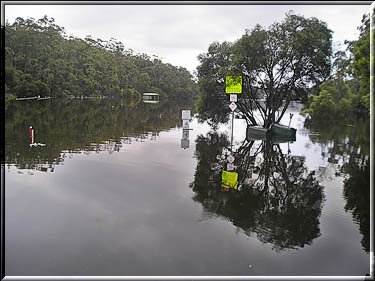 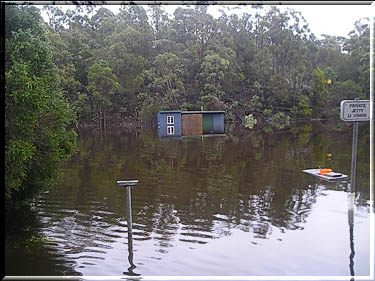 Hire a Stand Up Paddle Board

Bringing a Pet to the Park